Not too far from my house in Toronto’s Little Portugal is a tiny tailor shop, just a small business among others in a non-descript mall on a busy downtown street.

I’ve never actually been in this shop, but I know it well – entirely because of the sign outside. 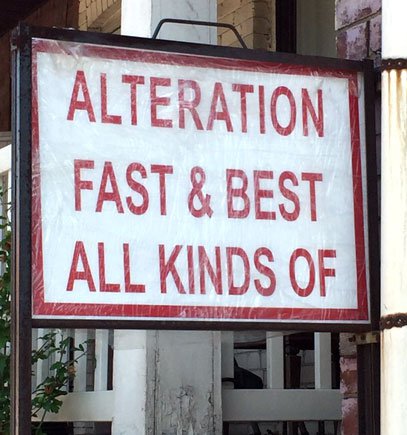 Here’s what it says:

ALTERATION
FAST & BEST
ALL KINDS OF

Whenever I drive or cycle by that sign, I can’t help smiling. It’s not elegant. It’s not well designed. (It’s not even grammatically correct!) But it is memorable.

The tailor’s sign is memorable because it’s simple and concise. Functioning as it does like a billboard ad, it accomplishes the first responsibility of communication: It cuts through the clutter.

Think about your communications. How many of us labour over our writing, and in the process, end up muddying the waters? We use four words when two will do. We use complicated sentences when straightforward ones will do. And – one of my biggest pet peeves – we use jargon, when what is needed is simple, clear language everyone understands.

The Oxford Concise Dictionary defines jargon as: unintelligible words, gibberish; barbarous or debased language; mode of speech familiar only to a group or profession.

As Oxford's third definition hints, when used by a particular group or profession – amongst themselves (!) – jargon can be an efficient way to communicate.

But when used with an external audience, jargon is lazy and confusing. And it does nothing to make you stand out from all the other “solutions-oriented, customer-focused, proactive,” jargon-loving folks.

I’ll admit, it’s easy to fall into the trap of thinking we must constantly use current industry language, including jargon, buzzwords, and acronyms, when writing to and for our clients and customers. Otherwise, how will our readers know for sure that we’re smart, knowledgeable professionals?

Whatever term you prefer, here are five of the most common and egregious (in my view) examples that you should avoid using.

According to the Oxford Concise Dictionary, leverage is a noun meaning: “action of, way of applying lever; set or system of levers; power, mechanical advantage gained by use of lever.”

In finance, leverage refers to “any technique involving the use of borrowed funds in the purchase of an asset, with the expectation that the after-tax income from the asset and asset price appreciation will exceed the borrowing cost.” (Wikipedia)

Leverage is also a “means of accomplishing a purpose, power or influence.” (Oxford)

I know words evolve (and perhaps I should be less 19th century about this), but using leverage as a verb just sticks in my craw. If nothing else, it’s over-used.

Please, next time you’re tempted to leverage this, that or the other thing, stop for a minute, get more creative, and come up with a different word. How about something like increase, magnify or augment?

Synergy is a noun meaning: “the interaction or cooperation of two or more organizations, substances, or other agents to produce a combined effect greater than the sum of their separate effects.” (Oxford)

Synergize is a verb meaning: “combine or coordinate the activity of (two or more agents) to produce a joint effect greater than the sum of their separate effects.”

Paradigm shift is defined as: “an important change that happens when the usual way of thinking about or doing something is replaced by a new and different way.” (Merriam-Webster).

The phrase was coined by Thomas Kuhn, a physicist, historian of science, and one of 20th century’s most influential philosophers. In his 1962 book, The Structure of Scientific Revolutions, Kuhn used it to describe his views about how science changes over time. But, as Robert Fulford notes in his Globe and Mail column of June 5, 1999, “paradigm shift” turned out to be "a crossover hit: It moved nimbly from science to culture to sports to business."

But it’s a complex phrase. First, your reader has to know what “paradigm” means, then she has to understand why a shift in paradigms is something to get excited about. And, as explained by Tania Lombrozo, a psychology professor at the University of California, Berkeley, there isn’t just one meaning of paradigm in Kuhn’s world; Kuhn used “paradigm shift” in 21 distinct ways.

So, if Kuhn, the master philosopher found “paradigm shift” complicated, what are we mere mortals to think? Paradigm shift might sound all smarty-pants, but if you say “significant change” or “fundamental change,” instead, your audience is far more likely to understand exactly what you mean.

As the old saying goes, if I had a dollar for every professional services firm – engineering, architectural, legal, whatever – that provided “innovative solutions,” I’d be rich. No firm ever has offered "run-of-the-mill products and services." Or “in-the-box thinking.”

The biggest problem with “innovative solutions” is that it’s vague. What exactly will your product or service do for me? Will it make my life easier? Will it save me time, money, headaches? Will it boost my profile? Increase my customer base? Win me more RFPs?

It’s fine to use “innovative solutions” if you can actually back it up with concrete examples. Many companies, however, use this phrase as shorthand for “we’re different.” But if everyone is saying the same thing, how does that make you different?

People often use “maximize” or “optimize” when “improve” is all that’s needed. As for “utilize,” I ask you, what’s wrong with the simple “use”?

Which brings us back to my tailor…imagine if his sign included the usual corporate clap-trap. He wouldn’t be doing “Alterations.” He’d be in the business of “Innovative Wardrobe Optimization.”

If the thought of seeing those words on a sign makes you cringe, then my work here just might be done.